Whenever asked about this particular performer right after AS3 aired, peoples’ first answer would be „Is she gonna jump from there?“. Of course you know who we‘re talking about: AJA, who is currently taking over the world – from Brooklyn to Berlin (and Edinburgh, London, Antwerp, Cologne …) with their BOX OFFICE album release tour.

Released on the 7th of February, the debut album containing 15 (yes, you read that right) tracks has gotten praise across the board from the likes of the Rolling Stone Magazine, Billboard and of course, the AJA supporters around the world.

Asked about their favorite tracks on the album, fans on Twitter said the following:

Now, listening to your favorite music in your own room is one thing, but on Friday 22nd of February (last night at the time of writing this article), the audience at SchwuZ in Berlin, Germany had the chance to witness the first Europe stop of Aja‘s album release tour. What‘s even more exciting is the fact that AJA are being accompanied by Shilow, a talented and passionate artist in his own right who collaborated on various tracks of Box Office and tours with AJA for some stops of their tour.

Of course, our Sparkles went to the capital city to see one of her favorite artists live and recounts her experience here on Dragadventures:

“Good morning from this plane to London Gatwick, still very much not having processed last night‘s events and the most prominent emotion I‘m feeling right now (well, besides a pretty noticeable lack of sleep, of course) is pride and love for Aja, who I had the absolute pleasure of seeing live last night.

If you remember my experience at Heels of Hell, you know that I fell pretty hard for this outstanding artist and if you want my reasons for that, read this handy list of 5 Reasons Why I support AJA (and you should, too!). When I saw the Berlin date on ajakween.com, I got so excited because it‘s not every day that you get one of your favorite artists so (relatively) close to home!

So, I got tickets, a flight and then waited patiently (ok, not really) for the 22nd of February to arrive. That day, I had to work till midday (and I can‘t take time off because of my line of work). But, somehow, I got to Berlin, got ready in record time (including some orange eyeshadow in honor of my Scottish unicorn children Amber and Lauren, who had flown all the way to see AJA perform (if that isn‘t dedication – you tell me!).

When I arrived at the venue at half past 7, there were only two other people waiting, but the line filled up pretty quickly and finally the doors opened and we got to enter SchwuZ. This club is located in Berlin‘s Neukölln neighborhood and it‘s huuuge (at least if you‘re from a relatively small city compared to the capital like me). The vibe I got right off the bat was a little bit industrial, a little bit hipster and also very colorful mixed in with some glamorous elements. The staff at the door, the coat check and the bar were very nice and welcoming and made us even more feel at ease. The actual area where the show was taking place was more like a concert setting than a normal club, with a stage deserving of that name including a digital projection backdrop to have videos running in the background of performances as well as plenty of room for artists and fans to get wild. 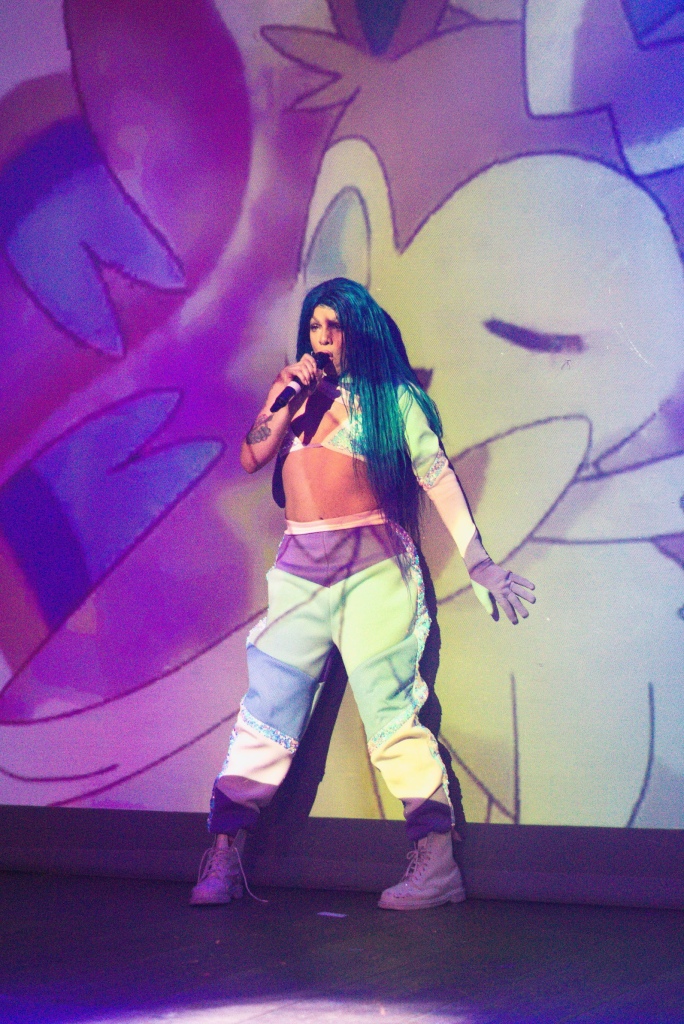 So, we (and by we I mean myself and the super nice people I met while waiting outside – it was actually very funny because every time someone came up to our little group, we would ask „Aja“? – like their name was our secret password and would immediately gain another „family“ member.) So, finally our little group turn the last corner into the main area of the club and lay eyes upon the Meet and Greet Area, which featured a very cute background and was exceptionally well lit, too. Ty, Aja‘s boyfriend was already setting up the merch table (if you get the chance, get yourself one of the Box Office Shirts and a physical copy of the album!).

Then, like a vision in a waterfall-neckline sparkly silvery dress and sporting long brunette hair with white high heels, AJA came out and were greeted by excited cheers from everyone waiting in line. The Meet and Greet was run smoothly and we got to talk quite a bit. I won‘t go into detail on here or else I might scare you off by getting overly emotional, but let‘s just say that Aja shocked me by telling me that they „knew exactly who I was“. I had brought them a copy of the 5 Reasons Why Article and also written a long letter on the back of it, which I gave to them. Honestly, seeing their face light up when they then recognized our MG photo from the HoH Newcastle Meet and Greet made my heart sing even more with love and pride for this human being I‘m so proud to support.

Ok, so I might haven gotten a little bit emotional there for a second, so let‘s get on with it, shall we? We took a photo together with our Dragadventures team mascot Annie the Unicorn and then got to snatch a spot right in the front row, which was perfect for various reasons, particularly for photographing the performance and also because that special energy you feel being that close to the artist – if you‘ve ever been barrier, you know what I‘m talking about.

Soon, the pre-show began and our host for the evening, local drag performer Gieza Poke gave us a set worthy of a Berlin drag show, including the „quickest outfit change Berlin has ever seen“, before introducing fierce queen Ocean to the stage. They took over with a slaying Lady Gaga Lip snyc and had the crowd pretty much go wild at this point.

Add a dance off featuring audience participation to Beyoncé’s Single Ladies to the mix (which had two Italian baby queens sweep the competition off the stage – think cartwheels, death drops, slut drops and a whole lot of fierce bitch energy) – every single person in the audience was ready to welcome the main guest onto the stage.

When AJA came on stage, sporting long red hair and an outfit paying hommage to the suit of actual drag racers complete with black work boots, and Shilow in black dungarees, a red hoodie and neon yellow hair – we all screamed our lungs out to the first notes of Tutanchamun, the first song of the night. Right off the bat, it was obvious that AJA has come into their own as a performing artist – the tedious days of lip syncs long gone (not that lip syncing is bad per se, but Aja always acclaimed that they are a rapper first, and burlesque/queer performer second!). 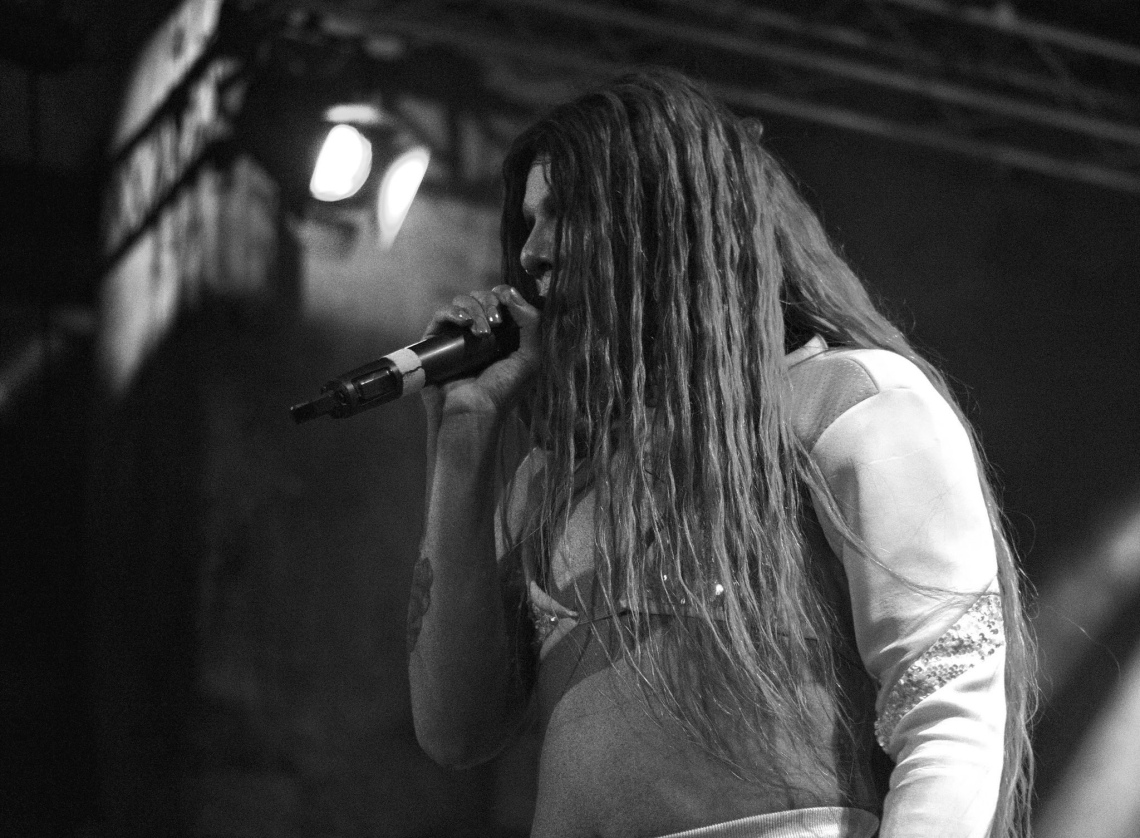 The air brimming with energy taking the leap from the duo on stage right into the hearts and souls of the crowd, AJA briefly talked to the audience about their debut album and thanked everyone for their support, before continuing getting us hyped with the next song. The whole set consisted of two parts with a 10-minute break as well as a Q&A section with Aja in between and had a legit concert feel to it rather than a club gig, which was really nice.

We got so many of our favorite songs: Art Jesus (which so far will only be featured in the Europe leg of the tour), as well as Jekyll and Hyde, Yokai, Willy Wonka, and of course the duet with fabulous rapper Cupkakke: Safari Zone sent us all into a frenzy, and the crowd mirrored Aja and Shilow jumping around on stage and just living their best lives to a T.

The outfit for the second part of the set was completely different and had our jaws drop to the floor, when both of them came out wearing matching track suits in pastel colors topped off with glitter hemlines, Aja whipping their blue and purple mermaid hair about as if we were in a mosh pit for Bring me the Horizon.

The show flew by far too quickly, and every single person in that crowd was sporting the same proud smile that you get when you’re just completely happy and feeling so incredibly alive (a thing I like to call that Drag Feeling – you know, when you just think to yourself: HOW? WHY? We don’t deserve that beautiful human soul on stage!

Aja and Shilow left the stage to the excited cheers of the crowd and I stayed a little bit longer in the club before going home (ok, to the Hostel) and then get up very early and fly to London the next day for one pink Bitch (that review is coming soon!).

And then, the next day, I did something which probably will go down as the most insane stunt I’ve ever done while at a Spoons at London Victoria while I was very much sleep deprived and missing Aja – what could it be? Hang on for the next part of this review!