It’s a bit of a funny story how I got into drag. I started watching Drag Race one night with my housemate and enjoyed it but wasn’t hooked. A couple of weeks later we had a massive argument and out of spite, I set about watching Drag Race without her. Yeah, that’s right, spite got me into drag. It is safe to say that I was only a couple of episodes in before I began watching it because I was enjoying and not as a way to ‘get back’ at my housemate. (Side note: It is also safe to say I have matured a lot since then!).

My first ‘favourite’ drag queen was Jinkx Monsoon, probably because I am a musical theatre nerd that never stops singing. By chance, they were doing a show near me and so I booked a ticket and then turned to YouTube to find out what a drag show actually entailed. Thanks to the magic of YouTube’s ‘suggested video’ feature I found UNHhhh and I think that was the turning point for me. That was when drag turned from a curiosity into a fully-fledged item on the list of things I will actually spend my time & money on. 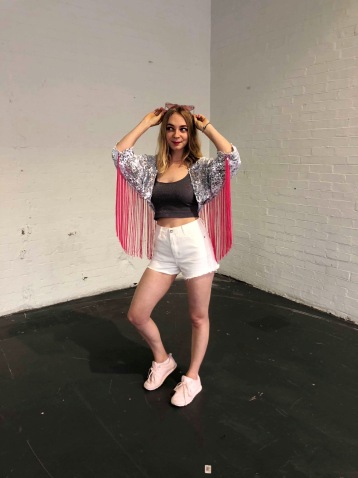 Obviously, this led to me finding out that Trixie had an album out and I can still remember listening to ‘I know you all over again’ for the first time in my car and WEEPING like I had just had my heart broken. I cry at a lot of things but songs aren’t really one of them so that made it clear to me that I had found my new favourite artist.

I have always sung. Even when I could barely talk I was always singing. When I was younger I used to have a Youtube channel filled with covers, I played gigs most weekends and I even recorded an EP when I was 17. I fell out of love with Youtube and performing once I got to uni – it turns out that countryside pubs and big city open mics have very different audiences and the latter were totally unbothered by me.

if you haven’t seen it, i posted a cover of ‘soldier’ by @trixiemattel on my Twitter (link in bio), why not have a watch? And then BUY ONE STONE ON ITUNES 💖 #onestone #trixiemattel #soldier #instacover #twittercover

When I find a song I like, my first instinct is always to learn how to play it so it wasn’t long before I could play the entirety of Two Birds.  I don’t know what made me decide to film a cover of Moving Parts in January – I was a little hungover, I looked a mess and I filmed it on Instagram stories! I had started talking to a few drag fans online by that point but I wasn’t really immersed in ‘stan’ culture. I didn’t even know what being a stan meant. But I uploaded it and it got an alright response. I was getting ready for work the next day when my boyfriend shouted to me that my phone was going nuts – turns out Trixie had found the cover somehow and had retweeted it. It sounds incredibly dumb to say this but that really did change a lot for me. Having validation from the songwriter and having people message me and want to hear more covers was just … really cool! It motivated me to get back into recording myself and enjoying making music again.

I decide which cover I’m going to do on a very ad hoc basis usually. It’s whatever song I’ve been particularly loving that week. I try to space out my Trixie covers so that I don’t run out before her next album comes out! I also love collaborating with other people on covers because it’s way more fun working with other people and it challenges me to come up with different harmonies. I’m now starting to dabble with layering my own voice and adding instruments to stop people getting bored! Generally, though, I try not to take it too seriously. If I start overthinking it, the song usually comes out terribly and I don’t enjoy the process. 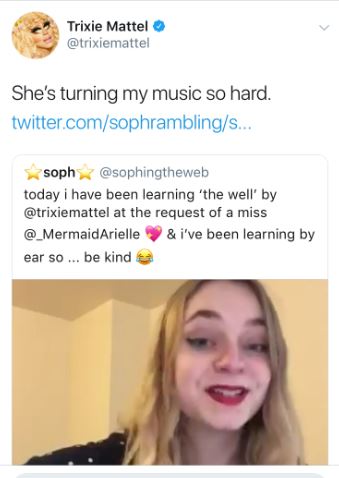 I’m so excited to see Trixie on her UK tour next year and have the opportunity to thank her in person for all the nice things she has said about my covers.

However, if I’m being completely honest, as much as I love singing and appreciate the nice things people say to me, that’s not the best part of it for me. The best part is that these videos have led to some amazing friendships and fun experiences. In turn, that has led to me becoming a better ally for the community and helps me to educate others around me who wouldn’t have been exposed to drag or LGBTQ+ issues otherwise. It sounds silly to say that singing on Twitter has changed my life but, in lots of ways, it has.