DragworldUK 2018 is over and it was a weekend to remember, for sure! We set out to ask our lovely readers who attended the convention about their favorite moments and it’s safe to say that we got an overwhelming response!

So here’s to our favorite weekend in August filled with glitter, fabulousness and most importantly, love for all things drag!

Found out about Dragworld from a friend. This year was her first time going and if she could change one thing, she would want to bring more of the underrated queens to the UK. The highlight at the Drag Ball for me was obviously Phi Phi, but also I’d never seen Jujubee perform before and she really was amazing. Also, Meth! I hadn’t known her before the Drag Ball and I absolutely loved her performances. Phi Phi should definitely perform next year!

Fave moment: “Meeting my idol, Phi Phi, who knew me from twitter because I recreated her riddler look from All Stars 2!

Henrietta
“Fun, safe and emotional”
Found out about Dragworld on Twitter and says: “It was so much better this year but I would have liked them to put ques in order for people to be able to move around easier”. She loved Alaska’s performance of Aliens at the Drag Ball and hopes that Biblegirl gets to perform next year! 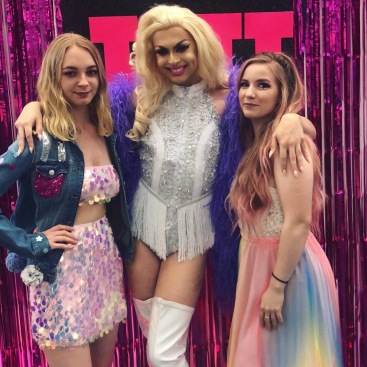 Found out about Dragworld on Twitter and attended for the first time.

Fave moment:  “Either meeting Cheryl Hole and accidentally telling her my friends call my feet hooves! Or getting to meet Courtney Conquers and her knowing who I am because she had reposted my merch picture. Her and Jamie (ed. from Drag Coven) were just so lovely!” 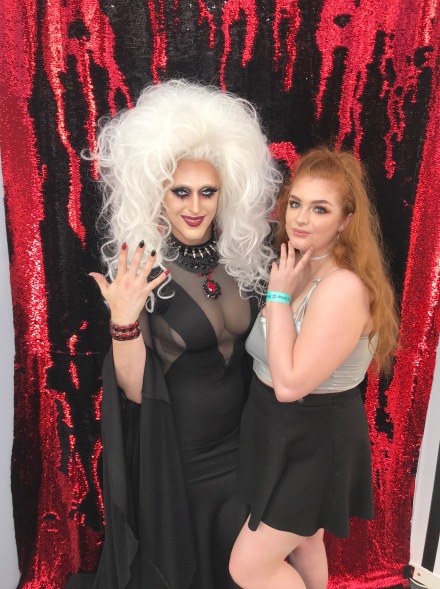 Found out about Dragworld from friends and social media. It was her first year at the convention and her highlight of the Drag Ball was when Biqtch Puddin’ was taken out as a surprise guest. “I was so shocked, I screamed so much that I lost my voice entirely for thewhole weekend.”

Fave moment: “Meeting Biqtch Puddin’ and being able to tell her how much her words and messages have positively impacted my life, and how much Dragula has helped me through things!”

Discovered Queens: Meth. “She is so talented!”. She also discovered all the drag kings that were there, “so much talent under one roof, it’s hard to narrow it down”.

Kali also wanted to say “thank you” to the organisers of DragWorld for making such a safe feeling queer space! I felt nothing but relaxed all weekend, and the love in the room was immeasurable.

Her highlight of the Drag Ball were Violet Chachki’s burlesque performances: “She’s just so confident and captivating when she’s on stage. I would love for Phi Phi and Violet to perform again, they’re both amazing.” 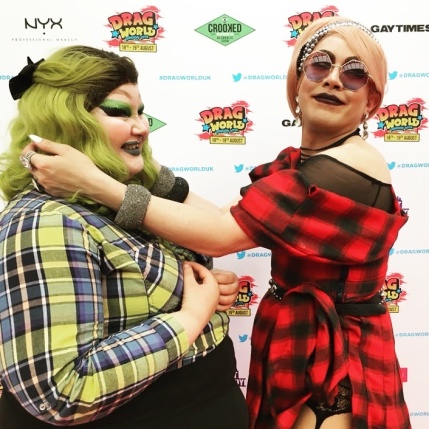 It was her second year attending and she says: “This year there was a lot more talent. In terms of Ru Girls there was a bigger variety of queens and not only the big popular ones. There was also a lot more attention on UK drag and they got more time in the spotlight with more catwalk performances and even appearing on panels this year which was extremely important to showcase them to such a big audience. All I can hope is that continues and grows bigger next year.”

“The ‘It’s okay not to be okay’ panel featuring Miss Fame, JuJubee , Scarlett O’hora and Crystal Lubrikunt was my favourite part of the whole weekend the atmosphere during that panel was really something else, the audience was so respectful and there was a real mutual love and respect between the panelists and the audience it was a really emotional and special time.”

She found out about the convention from friends and says: “I thought the event was amazing, and I met so many of my favourite queens, as well as lots of new UK talent, but the gendered bathrooms were a huge issue.”

New queens discovered:  So many! All of the Slay queens, but especially Ellie Diamond, were so kind, and also finally got to meet Crystal Lubrikunt who was amazing.

Luna loved the fact that at this year’s convention, there were more local queens. She also discovered a lot of new UK talent.

Em’s favorite performances at the Drag Ball were Violet Chachki’s and Phi Phi O’Hara’s and she hopes they will attend next year’s convention too.
Fave moment: My favourite part was meeting all of my friends and my favourite queens.

Fave moment: “Definitely meeting Phi Phi. She loved the nail I gave her and she also loved the mini Pikachu figure I gave her, which she originally thought was scary when I showed her a picture of it on twitter, but she thought it was so cute in real life. Our M&G picture was adorable, and afterwards she asked me to show it to her and she told me she loved it, then gave me a rocking hug for ages.”

New queens discovered: Lily Snatchdragon, Lolo Brow, Tayce, Scarlett O’hora and many more, but those are a few of my favourites!

About the Drag Ball: My favorite was by far Biqtch Puddin’! Was such a surprise and she absolutely nailed it ! I would love to see Jinkx perform next year or more Dragula queens.

Fave moment(s): Meeting new friends with the same interests, meeting Phi Phi as she took so much time with everyone and really cared about the fans , also being recognised as the “irn bru” girl by her later in the day was so funny.”

No new artists that I can think of –  although I got to meet Meth which was amazing!

About Dragworld: Such a well put together convention with loads of UK talent too ! Everyone seemed to really enjoy it and it created such a positive, safe and loving  environment!

Laia found out about Dragworld through Twitter. About the Drag Ball, Laia says: “I loved Phi Phi so much and I loved discovering Meth, who I had never seen before perform. I would love to see Katya or Trixie.”

Phi Phi being at her booth past the closing time so we could meet her and actually meeting all my internet friends that I made thanks to drag.

New queens discovered: “Yes! I met Anna Phylactic and Cheddar Gorgeous and now I am obsessed.”

About Dragworld: Please keep making Drag World a reality because I had never felt like I belonged so much in a place like I felt in there.