A true art form, Krustyna clown transforms into a living nightmare. With plenty of horror references and crazy stage antics, she’s the perfect candidate for Dragula. We grabbed a chat to discuss the idea of appearing on Dragula, her stage performances including some shocking onstage antics…. be prepared for Krustyna Clown!

DragAdventures: How did your drag journey start? What led you down the path to being Krustyna Clown?

Krustyna Clown: My drag journey started at a party called WHORE HAUS. I did drag for the first time there, with goals to be the SCARIEST witch for AHS night. Just after dressing up once or twice, I competed and took home the crown at the DRAGULA pageant when it was still a monthly party in LA, where I walked on stage and ripped my face off. The moment I heard that crowd ROAR and SCREAM for me it was over! I was hooked! This was all of course before I changed my drag name from Thursday Addam

DA: Your makeup is so incredibly creative, flawless yet it still screams horror. Who inspires your looks and how do you go about the creative process?

KC: THANK YOU! I tend to draw inspiration from horror movies, cartoons, and painters like Michael Hussar. My biggest drag inspirations are my very own drag family, DOOM HAUS. (Notorious Ali Doom, Frankie Doom, Lady Forbidden, and Fasique.) I’ve learned everything I know from these queens. They are literally the FIERCEST queens I’ve ever met. The creative process is always different, I tend to look in my sketchbooks for ideas, but mostly just start jabbing my face with brushes and see what happens and hope for the best. (Laughs)

DA: Your performances are something else! The energy you put out is passionate, for people who haven’t seen you perform what can they expect?

KC: At one of my shows you can expect high energy mixes where I can throw myself all over the stage, a bit of horror and blood, absolutely no grace, and maybe a little comedy…..in an I killed your baby that wouldn’t STFU and ate her kind of way…

DA: What’s been the craziest/horrific thing you’ve done during a performance?

KC: One of the most recent performances that I did for a fundraiser for ALC (which has instantly become a fave of mine.) I had an amazing friend, Sir (Erik) Wombat, come up on stage during my number and beat the shit out of me with floggers, bamboo sticks, and a cricket bat! It is exhilarating, sexual, and horrifyingly painful. During the number, he grabs me by the collar and slams me to the ground, gags me with his fingers, smacks and punches me around, and ended the number with a bit of asphyxiation. A month later, and I STILL have bruises all over my ass. It was cute! I love to hear the horror, gasps, and concern for my safety. (Laughs) *Dragadventures are left open-mouthed in shock* 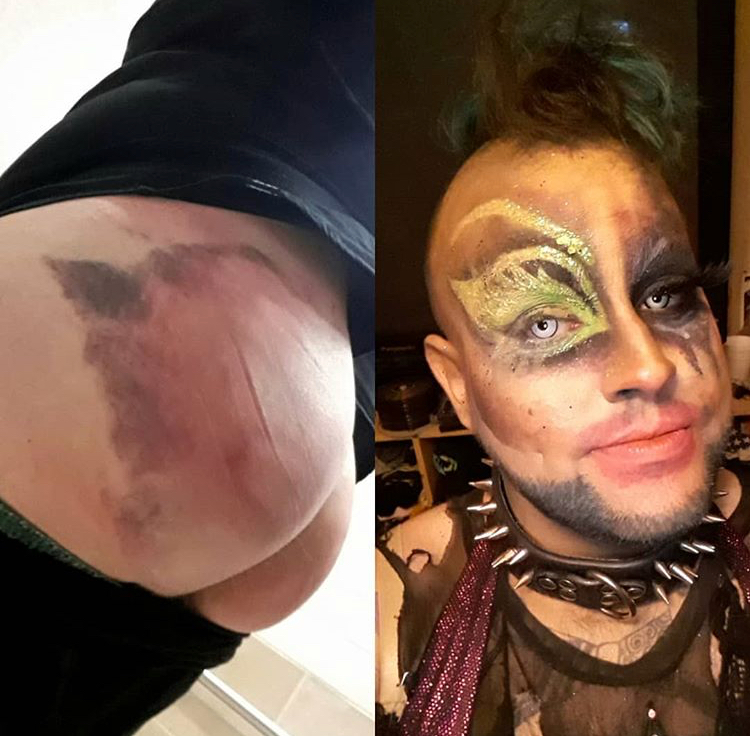 DA: We’re big fans of Dragula, and we think you’d be the perfect fit for the show! Have you applied or thought of applying for season three?

KC: I would fucking LOVE to be part of the Dragula show! I absolutely love the fact that alternative style drag of all kinds is being showcased, celebrated, and pushed into the light. Hopefully, you’ll see me as part of the cast someday soon!

DA: If you were to be on Dragula what part of the show would you most be excited about and the least?

KC: I’d be most excited about the runway! Aside from doing my best to put together the most shocking, terrifying, epic looks, I LOVE the physical challenges. For example, I love the zombie and mud wrestling challenges from season one. Season two has some of my favorite challenges as well, like, the paintball gun extermination, and I WANT TO FUCK SOMEONE UP IN THE THUNDER DOME! To be honest I DREAD the idea of having to eat some nasty shit or play with bugs. I am super picky with food and definitely DON’T fuck with bugs! 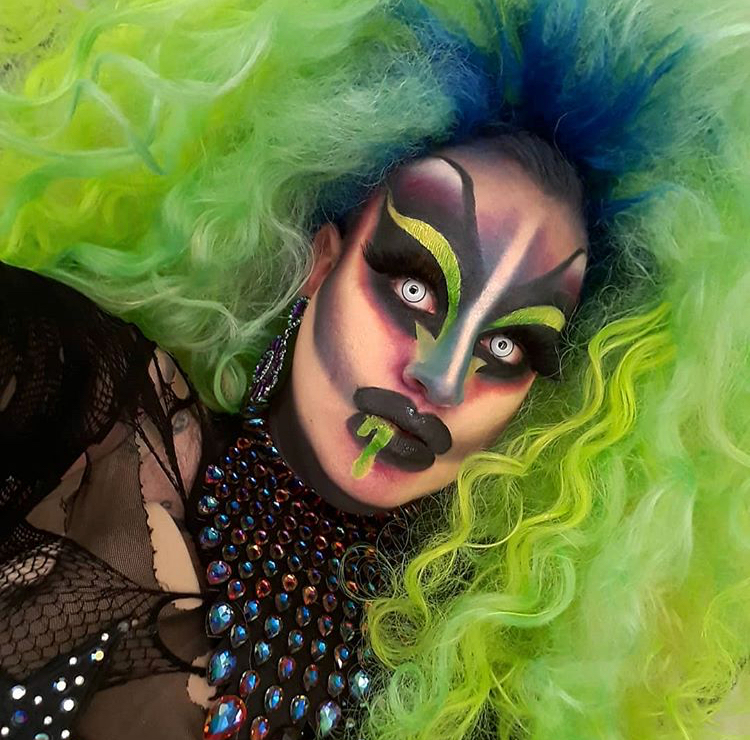 DA: What’s been the most OMG wow moment of your drag career to date?

KC: One of the most awesome parts of my drag career is being part of CLUB SCUM, and being asked to help represent the queer movement at The Growlers Six Festival and being singled out and featured in OC Weekly. The OMG moments for me are honestly being hit up by people who appreciate the buffoonery I bring to the table and ask for more or send me a bunch of questions to answer to be published online (Laughs)

DA: It’s fair to say your drag would not be out of place in a horror film. If you could binge watch on horror films all day what would be your top five to watch?

KC: It’s funny that you say that because most of the time I’m getting ready if I’m not watching Spice World or The Addams Family Values, I’m watching nothing but horror movies. My top 5 horror movies would probably be IT- the original AND remake, Texas Chainsaw Massacre, Evil Dead remake, Cabin in the woods, and I LOVE zombie movies like Dawn of the Dead, 28 Days Later, and REC.3

DA: What’s the drag scene like where you from? Are there any drag queens we should keep a watch out for (besides yourself)

KC: LA’s drag scene is known for being super diverse. In one night you’ll run into flawless goddesses like Melissa BeFierce and The Notorious Ali Doom to scary ass glamazon monsters like Frankie Doom or Xochi Mochi. We have some of the most known queens, drag kings, faux queens,  goblins, demons, queer punk performers. There are so many queens to look out for, but one you MUST look out for is LADY FORBIDDEN, definitely a legend in the underground queer punk scene along with her boyfriend, FASIQUE. I am also SO proud to call them my drag family.

DA: Where can fans catch you next and what’s in the future for Krustyna Clown?
KC: If I HAD any fans, they could probably catch me at their local insane asylums and abandoned circus tents. I also find myself performing in downtown LA including Xochi Mochi’s INVASION, CLUB SCUM, and have also been fortunate enough to take the Boulet Brothers QUEEN KONG stage. Hopefully come this Halloween season people will want this insane, killer clown in THEIR town! I want to see the world!

Check out this fabulous clown on the following social media: