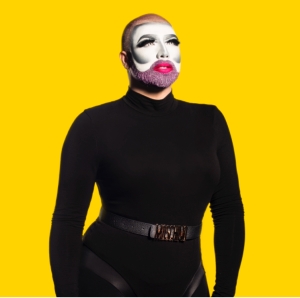 One of a kind drag queen, Danny Beard is instantly recognizable for his famous and fabulous glitter beard.

Having appeared on the UK’s popular family- favorite show ‘Britain’s Got Talent.’ Danny wowed the crowds and judges with his Rocky Horror rendition of ‘Sweet Transvestite.’ Making it all the way to the semifinals Danny broke the mold by featuring drag on prime time family TV!

He’s now the latest addition to the booming and popular line up of UK queens for promoter Holy Trannity.

DA: Danny Beard is a clever drag name as it cuts straight to what you are and the audience instantly knows the aesthetic of your character. What were the inspirations behind it?

Danny Beard: When I started experimenting with makeup, clothes, music, and art I was at university and I was studying contemporary theatre, arty farty I know! I was obsessed with Leigh Bowery and the whole movement surrounding him. I loved that he didn’t need a drag name it was still his name so I know I wanted to be Danny or Daniel and then once I started wearing a glitter beard it was Danny with the beard that eventually became Danny Beard!

DA: How long have you been doing drag and what got you into drag?

DB: My whole life! I used to walk around on my tip toes as a child because I loved that women wore heels I must have been about 4/5 and my dad would say ” Why you Walking Like That” and shout at me! I’ve been “Danny Beard” since 2014/15 now!

DA: What was your experience appearing on Britain’s Got Talent, do you think the exposure helped you break out more into the drag scene and getting bookings?

DB: BGT was an incredible journey! I have so much to thank it for! It most definitely helped with exposure but I wouldn’t say it was to the “Drag Scene.” I would say it was to a more mainstream audience. I’m very lucky that I still get to work in some amazing LGBT+ venues all over the UK but now because of the show I get to also perform to people who might not ever go and see a drag show normally at holiday parks or at pride and festival events!

DA: Congratulations on being added to the latest UK addition the Holy Trannity hosting and tour supports! How did it feel to be made permanent?

DB: I have known Paul who runs HT for a long time and actually truth be told we didn’t really ever have a great relationship working for rival bars many years ago in Manchester’s Gay Village!

But I think as time has gone on and we have both developed our brands and businesses we have both seen each other achieve some great things! I was honored he asked me to host his tours as its the biggest “Drag Race” brand in the UK at the moment and the work that goes into HT is amazing!

DA: While preparing for a gig have you had a “fangirl” moment with any other queens who were booked alongside you? 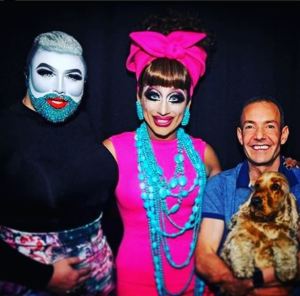 She was awkward, demanding and rude! No actually she was none of that and I totally felt in awe of her and I have never felt like that with any other queen really she was lovely and I really felt like I was in the presence of a Drag Superstar!

DA: If the UK was to have a RuPaul’s Drag Race would you consider contending? What kind of challenge do you think you’d win?

DB: I think there is more chance of the US show inviting UK queens on than a UK Drag Race but that’s just my opinion! In answer to your question, however, yes I would! I would love to have the opportunity to show my drag on that level, I mean I’d need to step my pussy up but I’m not afraid of a challenge!

I’m not a winner baby but at least I could show that you can be masculine and fem and you don’t have to conform to the “drag race aesthetic” by appearing on the show. I would definitely excel in acting and reading challenges and Id probably be out 4/5th as I’m not really the right formula for that particular show!

DA: What’s the hardest part of doing drag for you?

DB: Being lonely, It sounds needy but it’s true. When you travel about you are on your own constantly apart from an hour or two when everyone wants to grab you and touch you and then your back to silence. I say the makeup time for me too as it still takes me 2/2.5 hours every time regardless even for corporate functions where you might sing one song for 3.5 mins and be done!

DA: What upcoming show are you most looking forward to this year?

DB: Well I have a few really, I still get really excited anytime I get booked to appear at international event’s and I have a few of those coming up! I’m really looking forward to the Season 10 tour with HT and I can’t wait to get back into Pantomime at Christmas after my Panto debut last year!

Holy Trannity is putting on some fantastic shows this year be sure to follow Danny and his next shows on his social media below: