Today marks exactly a week since I got not only to see Willam perform for the third time in six days, no, it is also the one-week-anniversary of me visiting Nottingham for the first time. Then getting a bit lost on my way around town, taking a long nap on my hostel bunk bed and then finally getting to see one of my fave queens perform while discovering some stunning UK Queens who supported our favorite doll during her gig at Stealth Rooms in Nottingham. The show had been organized by Miss Kitty Tray (@kitty_tray) and it was the fourth city my drag travels brought me to in the UK.

After Heels of Hell, I had stayed up in Scotland for a bit and explored Edinburgh (definitely worth a visit!), before I finally took the train back down to England on the 26th of October. After having a long nap on my hostel bunk bed, I got ready to go out with Diana, a friend I made when both of us commented on Willam’s Instagram in July and instantly clicked. A fun fact about our friendship is that we basically went to our first Willam (& Sharon) gig one week after having met – yep, you could say we are kind of crazy. But let’s get back to the story, shall we?

What I love about waiting in line

When we arrived at the club, we had to wait in line for a bit, but it wasn’t a problem at all, because one of the cool things about a drag show is that you always get to make friends in line before you even enter the club (and you get to look at everybody’s pretty outfits and make-up!). So we had a good kiki with some fellow fans and got even more excited about the show.

Worshipping the doll in person

Finally, it was time to go “worship the doll in person” (Willam’s description of an M&G is pretty accurate if you ask me.) My favorite girl literally looked like a life-size doll in a short denim skirt with flowers on it and in a black jumper with a skeleton print (which I had given her at the Heels of Hells – show in Glasgow but I’ll refrain from fangirling too much at this point). She was eating skittles out of the bag and was visibly in a very good mood.

When it was my time to go up to her, I was thankfully much calmer than I’d been in London, where I basically had the deer-in-headlights-look on my face and as a consequence had to apologize to Willam at the Glasgow-show for being too starstruck (to which she kindly responded: ” I’m just a man in a wig” – yeah, I know but you’re literally one of my faves).

We talked for a bit and when she asked: “Wait, did you give me the jumper?” I think my smile could have lit up the not-so-queen-friendly lighting the M&G took place in ;-). She gave me a skittle, we took some photos and then my M&G was over. I went straight to the stage and there we were, in the second row, waiting for the show to begin. At this point, I had a very pleasant surprise because I ran into two girls of my Twitter fam, Maddie, and Amy. Those two had literally decided only some hours before to travel to Nottingham, so I was even more happy to see them at the gig.

After a short wait, the show began and we got to witness some awesome performances by Joe Black (@misterjoeblack). She’s for sure one of the UK-Queens who impressed me the most that evening, strutting on stage in a black gown, wearing a skull head-piece with feathers, one could say she was the (UK) Queen of Halloween that night. After hearing her sing and play the piano (ok, in this case, the keyboard) for various songs, I knew that this one would be on my list of queens to watch from now on. Speaking of watch list, she’s doing a solo show next year in the UK where she does songs inspired by Disney Villains (you can find the info on her Instagram). 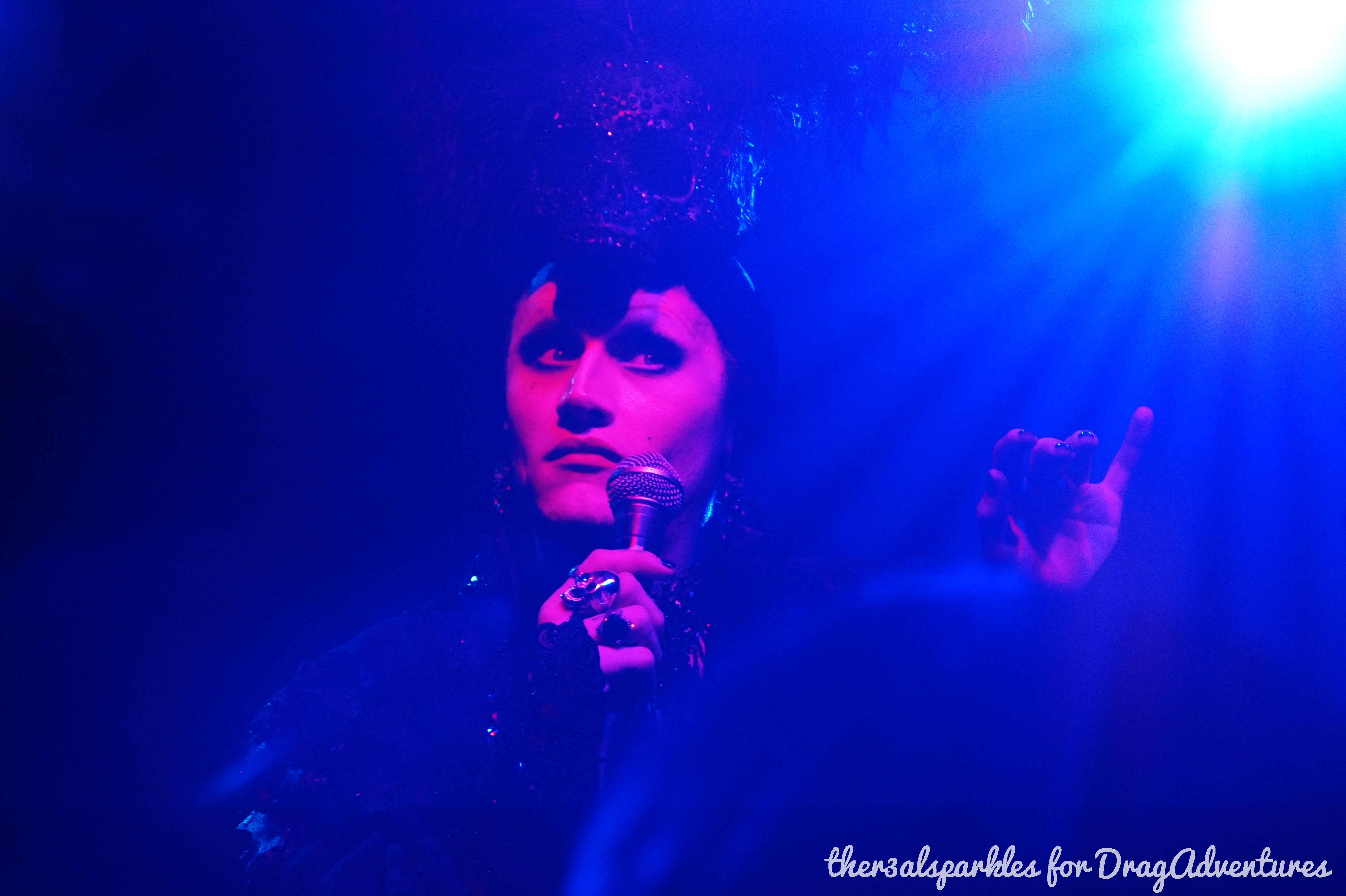 Next up, more stunning UK Queens entered the stage: Vivienne Lynsey (@viviennelynsey), Tittania (@tittania_bonbon), Kitten T (@queen_kitten_t) (Kitty’s Drag Daughter) and LunaMoon (@lunamoonnotts). While Vivienne and Tittania sang (each one on their own but they also performed beautifully together), Kitten T and Luna slayed the lipsynch.

I for sure expanded my list of UK Queens during their performances and I’m so happy I went to that particular gig because those Queens are AMAZING. I couldn’t imagine what I would have missed if I hadn’t gone to Nottingham.

I imagine that right now, some of you may think – but girl, where’s Willam? Don’t worry, Miss Belli went on that stage right after the first part of the support acts and let me tell you, that girl knows how to command attention ;). At first, she put her phone on one of the speakers and threatened everyone who was even remotely thinking about stealing it that that would mean the end of the gig – an occurrence which nearly happened during the second half of the gig when our favourite doll nearly forgot she had taken her phone and suddenly went “who took my phone?!” luckily for us, all was well and Miss Belli kept on doing what she does best: entertain the children. After singing; for example, she did the AAA girls song and then went on to confess that “once upon a time not long ago, she was a h**”- although, I guess if you are a Willam fan, that’s why you love and worship her. 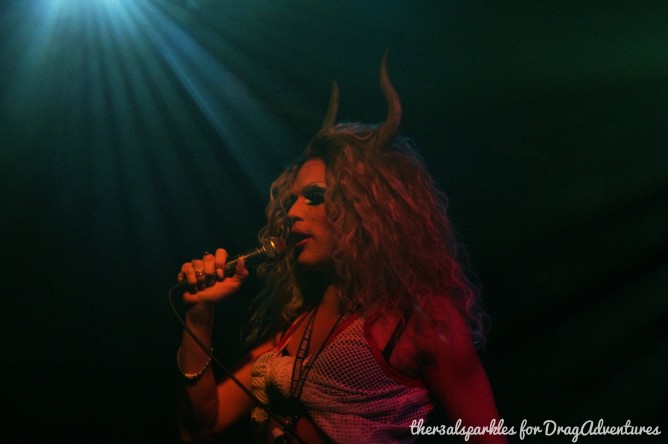 Later that night, Miss Belli also had the audience participate in some fun games, for example when she let two contestants come up on stage and had them catch skittles with their mouths only to then show them how it’s done properly herself. Of course, she also included a game of Popper Slap.

All in all, a typical Willam gig, which means in the first place a lot of fun – for the audience and for Willam herself. Honestly, the thing I love most about watching her perform is seeing her enjoying herself on stage.

Unfortunately, the gig was over far too soon. The lights went on and everybody left the club. Of course, me, betraying my Germanness, got separated from Diana and hung around with Maddie and Amy some more, a fact which gave me the opportunity to hop excitedly over to Joe Black and have a little chat with her. Did you know she has a pet snake called Sebastian? I even think there are two but I forgot the name of the other one. After that, I told her how much I had liked her performance and she told me how much she loved Germany and even recited some lyrics by Marlene Dietrich.

Finally, I told her how excited I was about Dragtech (it’s literally in 2 days you guys!) – we finally left the club and I went home to my bed where, of course, I still had to pack my backpack (again, I’m a fake German) and then couldn’t sleep because I was still too hyper after seeing all these talented queens perform.

The next day saw me catching a plane on 4 hours of sleep; people at the airport probably thought I was a bit weird with my pompom headband and my giant Willam fan but honestly, I couldn’t care less.

And thus ends the tale of a German Unicorn in Nottingham. Until Next time!