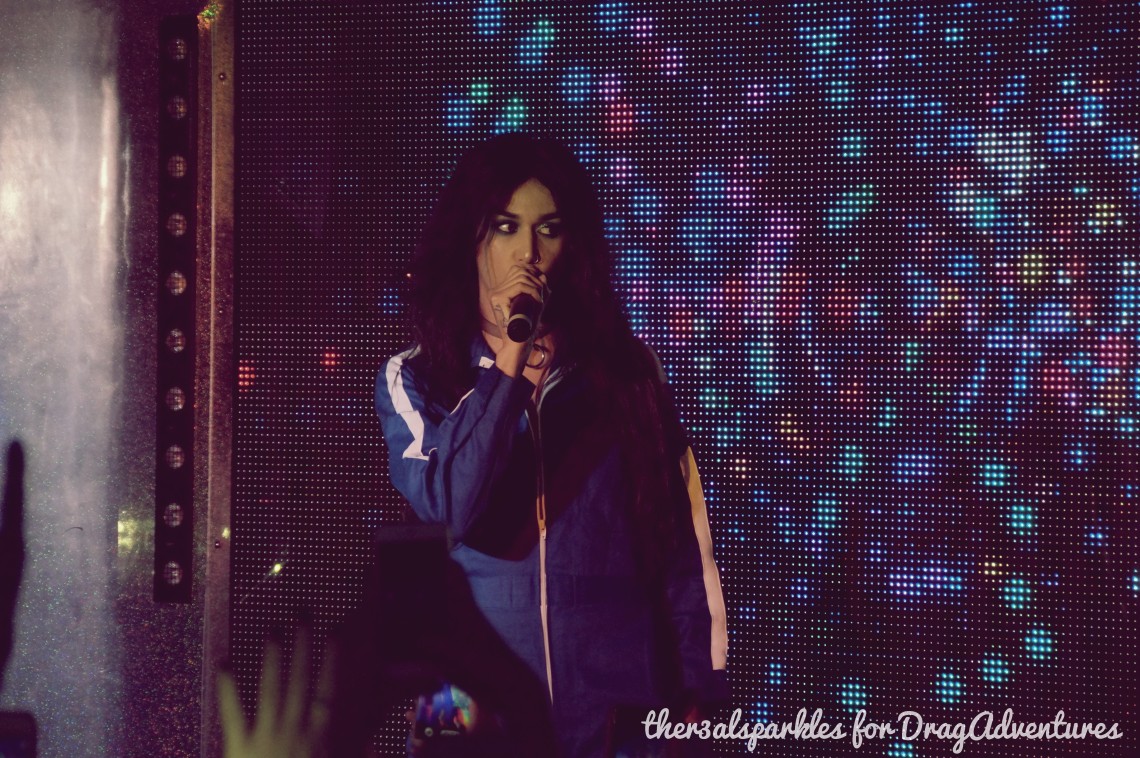 It’s been 5 days since Dragadventures got to meet Adore Delano for the first time ever at Revenge Brighton, where she performed for her UK Birthday tour on her actual birthday, the 29th of September. I flew back home the day after and the whole experience hit me real hard while I was on the plane (I mean, 1 hour and 40 minutes without Internet to distract myself from overthinking about my first time meeting my absolute fave queen in this galaxy).

Isn’t it crazy how getting to hug and actually talk to someone you first saw in a YouTube video of RPDR Season 6 (we don’t have it on Netflix over here) can make you cry on a plane? Because it sure did that to me after already having been super emo in the club right after the M&G.

After speaking to some gorgeous girls of our Haus of A door twitter fam, we got some beautiful pictures and some amazing stories about the whole Birthday Tour experience to share with you. So if you want to read about all that, stay tuned because it’s going to be a wild one!

Adore Delano’s birthday tour was organized by Holy Trannity (@holy_trannity) and included 8 gigs all over the UK, from Glasgow in the North to Brighton in the South. While Team DragAdventures (Kirsty and me as well as our lovely DragFam member Annie) only went to one date, some fans went all out – for example Maddie @MadeleineAinger, who literally was on tour with Adore for 4 days or Louie @Hodgson_Louie, who had her collarbone broken at a concert because of some crazy fans pushing her against the barrier when Adore held her hand while singing (please, let’s never be one of those crazies!).

After every performance, Twitter was inundated by photos and videos taken by fans who had been at the respective date and every time, we could see Adore having all the fun on stage and being the rockstar that we know she is while singing some songs of her new album (Whatever) live. While in Brighton, we got to hear Negative Nancy, 27 club, Adam’s apple, and Pretty Boys Cry, but Miss Delano changed the setlist every time, so, for example, other cities got to experience Witch Hunt live for the first time. But really, the song choice wouldn’t matter to me, because Adore will be brilliant at performing each and every song. She has that special kind of energy that will captivate her audience and makes me smile during the whole of her set all while I was asking myself of how blessed I am to have found this gorgeous human being nearly a year ago on YouTube -and also while I was trying to take some photos of her performance for the site.

So after all of this general stuff, let me tell you about Kirsty’s and my first time meeting Adore Delano (Annie had met her before – you can read her story about flying to Las Vegas on her own for her first M&G).

As you may know, I don’t live in the UK (although Annie likes to claim I’m an honorary Brit), so I had to catch a plane at 6:30 am on the Thursday before the show to fly to London Stansted, from where I took a train on my own to go down to Brighton. Once there, I explored the city for a bit, took some photos on the pier and then went to have a long nap on my bunk bed (Because of course I’d not gotten more than three hours of sleep the night before as I was so excited to see Adore and also because I had decided to dye my hair again at 10 pm). Brighton is for sure a city I could live in because it’s so different from most cities I’ve been to – the moment you step out of the train station, you get this special vibe of openness and ‘being different is ok’ that this city seems to emit. I have a feeling people in Brighton wouldn’t stare at me like some Londoners did while I was wearing my rainbow-colored unicorn outfit for Dragworld!

After my nap, I had to venture out of the Hostel I was staying in to find some working Wi-Fi because I had had this idea of making a funny birthday video for Adore with some of the Twitter Adoriverse. So I literally sat in a McDonald’s for an hour and a half to download their video submissions and to edit everything together. I’m happy to say that my fellow Adore Delano babies who participated in this project told me they liked what I did because I’m in no way one of those super artsy, talented fans she has so I thought at least make it a bit funny. If you want to watch what we did and also listen to three Swedish Grannies sing a happy birthday song to Adore, click here.

The next day, I met up with Kirsty, Annie in Brighton and after having a drink in the Revenge Bar (which is around the corner from Revenge Club where she performed), we checked into our AirBnb. While Kirsty managed to stay somewhat calm during us getting ready, for Annie and me, the “we-are-actually-going-to-meet-Adore-Delano” nervousness kicked in pretty soon and at dinner, I couldn’t even properly write the last notes on the birthday cards.

After having a quick dinner, we took a taxi to the club and thanks to being three of the fifteen people actually having managed to get the VIP tickets, we got to jump the line and going straight to the little VIP section overlooking the stage. While we waited for the club to fill up, we got to talk to some of the fans and all of them were super-excited and happy because we would get to be with Adore on her actual birthday.

It amazes me every time how positive and welcoming most (99%) of drag fans (and especially, Adore Delano fans) are. After a while, the show began and the host of the evening, a brilliant dragqueen named Lolo Brow (Instagram @lolobrow) took the stage while lip syncing to a mix of “I got a hangover.”

After Lolo, two more opening acts took over the stage and each of them managed to surprise and wow us. We had Crystal Lubrikunt (Instagram @crystalubrikunt) going all out to a Harry-Potter themed Mash-up while being dressed up as Myrtle, the whining bathroom ghost in the third book of the series. After Crystal, Lydia L’scabies (Instagram @lydialscabies) took over with a stunning performance who shed an ironical point of view about the whole Internet thing. After her, we got to “Go bananas“ with Rococo Chanel (Instagram @rococo_chanel) 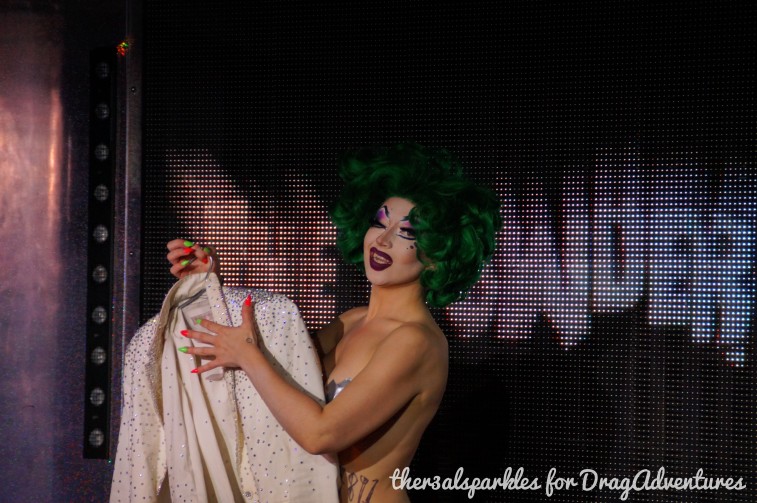 The fabulous hostess of the evening – Lolo Brow. 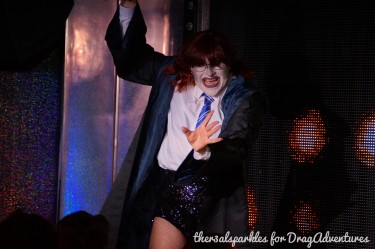 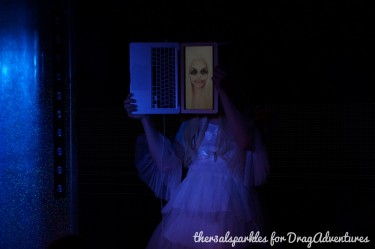 Lydia L’scabies is cooler than your Snapchat filter. 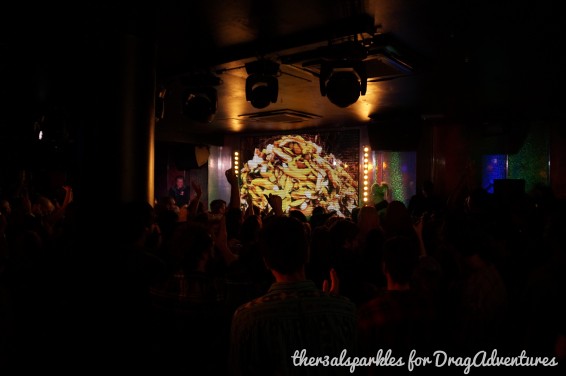 Freelee the Banana Girl is shaking (also feat. the most adorable security guard you’ve ever seen at a club)

All of the opening queens were from the UK and me, not having much knowledge about UK Queens for sure got some new queens to watch out of their performances.

So at this point, all of the fans were beyond ready to welcome our favorite rockstar mermaid to the stage and as soon as the first notes of Negative Nancy sounded through the club and we could get the first glimpse of black hair, a blue overall and of course, Adore’s beautiful voice, every single fan at that club went into a frenzy and I got goosebumps when the whole club sang along to the chorus of Negative Nancy. I got all tingly inside – you know, that feeling when you see a person you care about a lot doing what they love and you just are proud of them (I can’t really describe it but chances are, if you are a drag fan, you know what I’m talking about). So after the first song, Adore told us how much she loved being with us and how much she was looking forward to meeting us in person (“How many of you have M&G? I can’t wait to meet you gorgeous little f*ckers!) At that point, I probably had the stupidest grin on my face but I’d like to think, so had everyone else at that club. 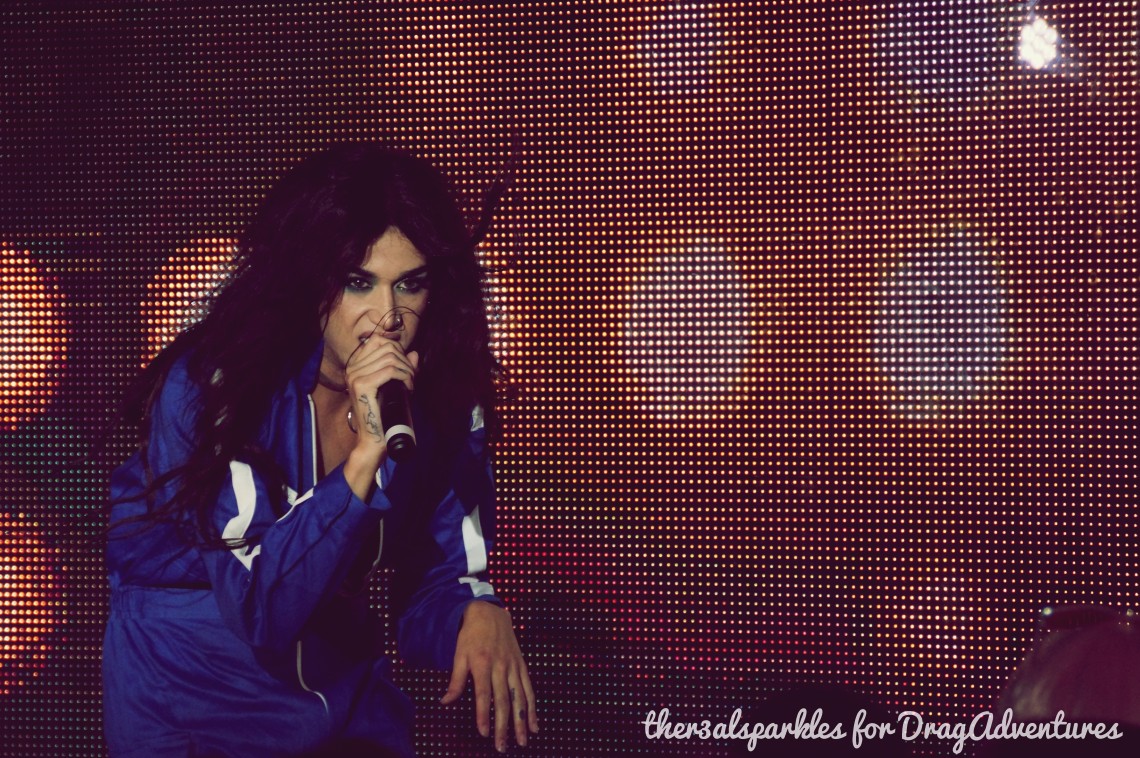 The next three songs Adore did for us were 27 club, a song which is my personal favorite on her new album and which also holds a lot of meaning for her- again if you’re an Adore Delano fan, you know what I’m talking about – let me just say I’m so proud of her for making it through and I’m beyond happy all of us got to tag along while she entered her 28th year on this earth as well for the rest of the ride. 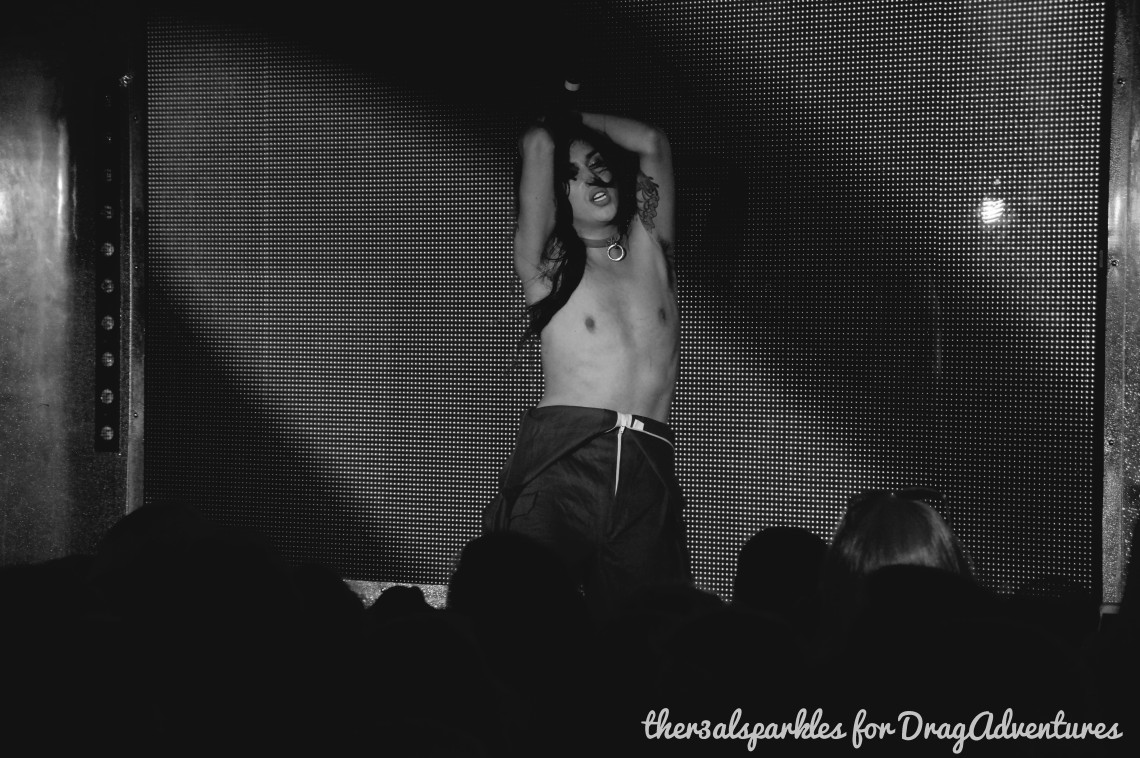 After that, she sang Adam’s apple – a song, which, according to Adore was desperately needed by the kids of this generation, because they don’t have anything to represent them right now. If you ever see her face while performing that one, you will easily understand how right she is with ther claim. Another thing you need to know about Adore Delano is that she really cares a lot about her younger fans, hence why she fought for as many tour dates as possible to be 14+. 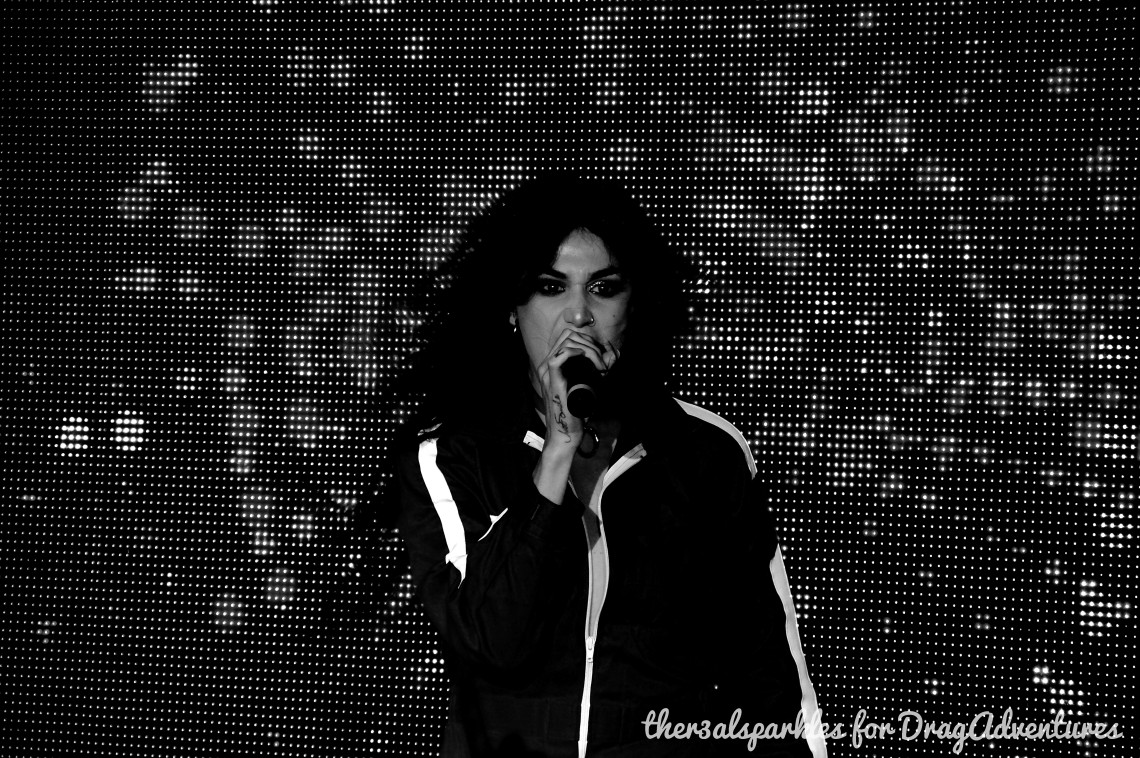 The last song performed by Adore was Pretty Boys Cry, another one of my favorites on the Whatever album. When the song ended, I couldn’t believe it was already over because I’d gladly stayed in that little Adore Delano bubble I was in, just keeping on watching her perform the music she really wanted to put out and being her truest self. But of course, I know, a club gig isn’t a full-on concert tour with a live band (luckily for all of her fans, Adore has hinted more than once about that happening soon.) Of course, before Adore left the stage to prepare for her M&G, she had to blow out the candles on her birthday cake and listen to every single person at that club singing Happy Birthday to her. If you know Adore, she made the cutest little faces at that point and I personally was happier to be with her on her birthday than I ever was on my own. 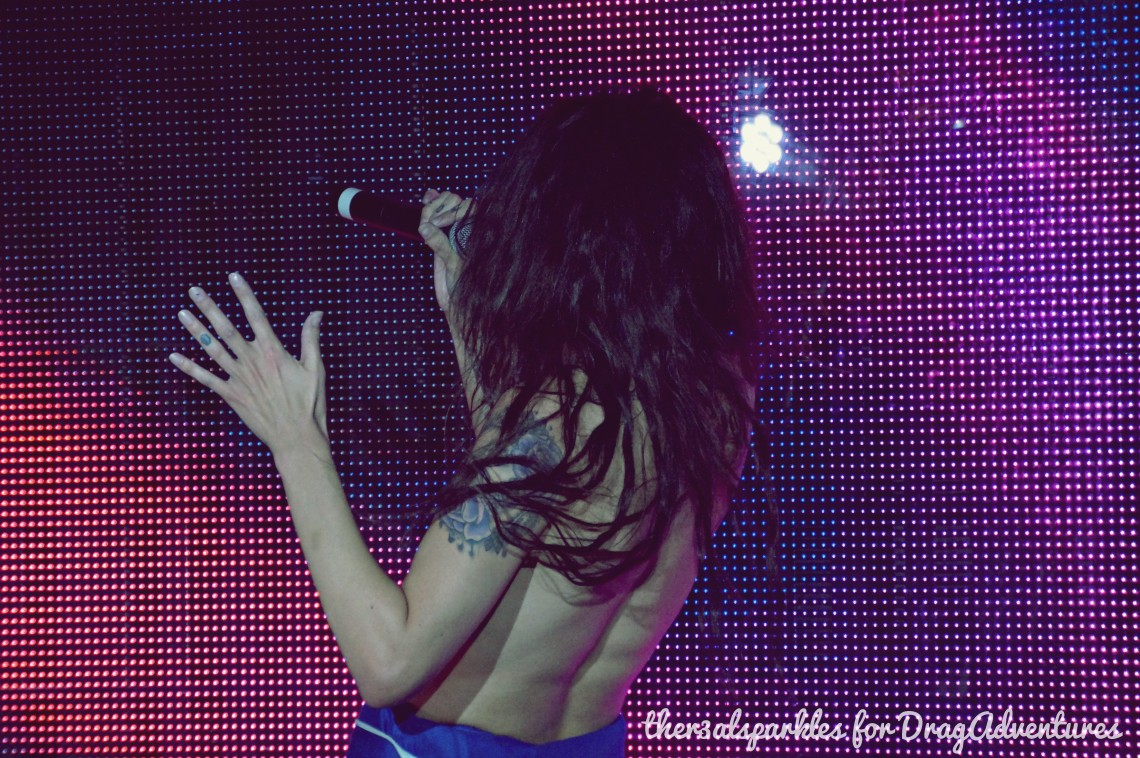 After Adore left the stage, the M&G was announced to start in 30 minutes and that was the exact moment I realized I was going to actually meet the person who had helped me through one of the darkest periods of my life just by existing and doing what she does, so you will understand when I say that me getting nervous doesn’t even begin to describe it.

Note: Congratulations, you’ve made it through the first part of me getting all emotional again over my experience at the Birthday Tour. Part 2 will come soon, stay tuned! I can’t wait to share the Adore Delano Love as well as my first M&G experience with all you “gorgeous f*ckers“).See you there!